A new book on Burma is described as part travelogue, part history, part investigation.  It looks at the influence of China and India in this region of the world and what the possible implications are for both Burma itself and for the rest of the world. 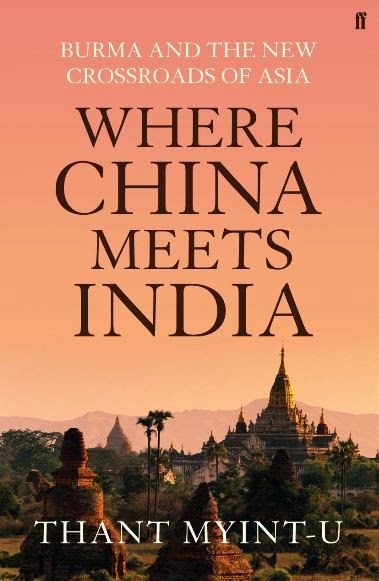 A book description from Amazon:

From their very beginnings, the civilizations of China and India have been walled off from each other, not only by the towering summits of the Himalayas, but also by the vast and impenetrable jungle, hostile tribes, and remote inland kingdoms that once stretched a thousand miles from Calcutta across Burma to the upper Yangtze River. In the next few years this last great frontier will likely vanish ­-­ forests cut down, dirt roads replaced by superhighways, insurgencies ended ­- leaving China and India exposed to each other as never before. This basic shift in geography is as profound as the opening of the Suez Canal. What will this change mean? Thant Myint-U is in a unique position to know. Over the past few years he has travelled extensively across this vast territory. In a region of long-forgotten kingdoms and modern-day wars, high-speed trains and gleaming new shopping malls have now come within striking distance of the last remaining forests and impoverished mountain communities. And he has pondered the new strategic centrality of Burma, the country of his ancestry, where Asia’s two rising giant powers ­- China and India ­- appear to be vying for supremacy. Part travelogue, part history, part investigation, Where China Meets India takes us across the fast-changing Asian frontier, giving us a masterful account of the region’s long and rich history and its sudden significance for the rest of the world.

Thant Myint-U was born in the USA and is the grandson of U Thant a former United Nations Secretary General.  An Interview in South-East Asia Times (2009) gives a good background on his life and beliefs

Some of the best information about getting to the Bridge on the River Kwai are found on http://www.seat61.com/Bridge-on-the-River-Kwai.htm  Here you will find timetables and suggested 1, 2 & 3 day itineraries.   The railway line was built during the 2nd World War by the Japanese as part of a supply route to Burma.  The…

The overnight train leaves from Hualamphong station central Bangkok at 20:00 hours and is scheduled to arrive in Nong Khai at 08:25 the next morning.  From here you can choose to (1). make your own way to the Friendship bridge and Lao/Thai Border or (2) take a connecting train into Laos.   The connecting train…

Mandalay is not over run with tourist places to eat, but there are a number of options as well as much more authentic local options on every street and market. Some of the options are None of these appear to have their own websites, so check out others opinion on tripadvisor. Mann’s Chinese restaurant 83rd…

Most accommodation in the Bagan area is in the Nyaung U or New Bagan townships.  New Bagan has the best appointed mid range options while Nyaung OO has the cheaper backpacker options for food and accommodation.  Old Bagan residents were cleared by the government in the late 1990s to New Bagan.  In old Bagan itself…

If you are heading to Bangkok from Vientiane then it is worth considering the overnight train.  Given that a 1st class fare costs just under USD $40 and 2nd class about $25 it is very economical. The train leaves Nong Khai, across the Thai Border at 18:20 and is scheduled to arrive in Bangkok at…

There are many hotels to choose from in Luang Prabang.  Here are 5  in all price ranges and why they are worth staying at View Luang Prabang Hotels/Guesthouses in a larger map     Sopha House – quiet and close http://www.sophahouse.com/ 52 Ban Watsene Luangprabang Laos Doubles start from $15/$20 per night (Low season/ High…