Sagaing is on the opposite side of the river to Ava. Set on a hill it has hundreds of Buddhist temples and monasteries and thousands of monks and nuns.
The setting has plenty of trees and shade. Walking around on the interconnection paths and trails can be a relaxing way to observe Burmese life. The position on the hill gives good perspective of the surrounding area.
The months of October and November can be busy. This is when Buddhists from around the country come to offer their respects and robes to Sagaing’s monks. This occurs during the the full moon of Tazaungmon.

Getting to Sagaing and Inwa,
The cost of hiring a driver is about $25 from Mandalay. After Sagaing, your driver can take you to the ferry. From there you can visit the Inwa (Ava) area. There a horse and cart will take you for a three hour tour of the Inwa area. This can cost 3,000 – 5,000 kyat – prices are fixed amongst the drivers so there is not a lot of bargaining. On the return drive you can ask your driver to stop at U Bein’s Bridge. Sunset is an ideal time to be in this area.

Inwa was formerly known as Ava and once reigned as the capital of Burma for 400 years. Not much remains of the glory days but what is there is a real glimpse of living Burma. A tour will take you past a series of sites. 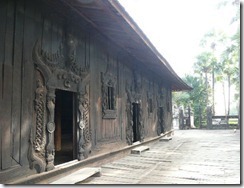 This a a teak monastery in it’s original unrestored state. The entire building of the monastery is highly decorated with carvings and ornamentation
There is also a government restoration of Bagaya Kyaunag 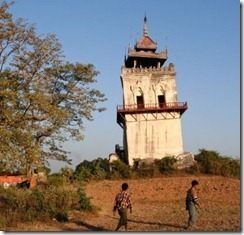 This stone water tower acquired it’s tilt in the 1838 earthquake. You can climb the stirs of this leaning tower of Inwa.

This is another monastery but built with brick, dating from about 1822. It was damaged in the big 1838 earthquake but was later restored in the 1870s

It is a fact that Angkor Wat and the surrounding temples see an ever increasing number of tourists and large tour groups.  There are a few ways to avoid the crowds.Firstly there are some suggestions on the various times of day, followed by some comments on some specific temples Sunrise Angkor Wat is the most…

Lake Inle does not have direct airport access.  The nearest airport is Heho airport 45 minutes to an hour away.  Easy driving with nice countryside to the township of Nyanugshwe.The lake is made up of two lakes the Northern, where most tourists limit themselves to and the Southern.  Getting on the lake You will have…

Note: Updated Exchange rates info April 2022 The Vientiane airport is less than 10 minutes from the centre of the city.  The 2 main ways to get there are via taxi or tuk tuk At both the international and domestic terminals there is a taxi counter.  Here you prepay your journey and are assigned a…

One of the artisan crafts that is found specifically in Mandalay is the making of Gold Leaf. This is a long and manual process whereby a small amount of gold is beaten by hand (with a large sledge hammer) to become the gold leaf that is used in any Burmese Monastery or temples in Burma, …