This is a destination you get to by boat. A 1 hour trip will take you 11 km to Mingun. One of those destinations where the joy of travel is as much in the getting there is as in the destination itself. Here there is a partially completed gigantic Paya (pagoda, temple) and the Mingun Bell

The building started in about 1791 but was never completed due to the death of the building king 30 years later in 1820. If completed it would have measured 500 feet but only managed to get to 162 feet. It was damaged in an 1838 earthquake. You can walk about and on this structure.

South of Mingun Pagoda is a 5m model of what the pagoda was supposed to look like, when finished.

After descending Mingun Paya, if you walk a short distance north you will find the ornate circular white temple known as Hsinbyume Paya, 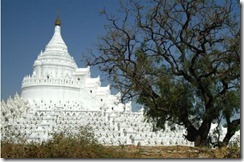 Built in 1816, three this was a memorial to the Hsinbyume princess. Seven wavy terraces around the pagoda represent the seven mountains around the mythical Mount Meru. This pagoda was badly damaged in the 1838 earthquake but was restored it in 1874. Because it is very white it can be very hot here with the reflected light, so you may need a drinks stop after the visit. 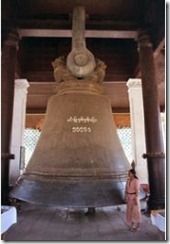 As is appropriate with a giant sized temple a giant sized bronze bell was cast. Weighing 90 tonnes it is the world’s largest uncracked bell. The bell supports were damaged in the 1838 earthquake so it was moved to a riverside shrine.

Privately hired boats are also possible and expect to pay about $20 for the day’s trip. There is a vigorous trade in boats down by the water’s edge so you should have no problem with choice of boat.

Yangon is  home to over 5 million people.  Formerly it was called Rangoon and is the economic hub of the country. View Yangon (Ragoon) in a larger map Shwedagon Pagoda An iconic symbol of Burma and considered by many to be the single-most important religious site in Myanmar.  In this regions there has been many…

As with many Asian destinations your travel planning should be based on the fact things happen slowly here.  Travel times are longer than you expect and not everything will go to plan.  If the number of locations in the itineraries below seem sparse, there is a reason for this!  But you will have no problem…

Like most major cities Kuala Lumpur has a range of public transport options.  As the city has grown traffic congestion has become a problem in the city itself and government has attempted to provide transport solutions. Taxis are the most convenient option, but can be the most expensive.  ALWAYS ask for the meter to be…

Travelling in Burma is harder than other countries in the region.  of course you can travel independently, but restrictions and timetable changes are a part of the deal. For this reason most travellers choose to use a local travel agent.  This gives them flexibility with travel arrangements and takes much of the stress out of trying to make arrangements from abroad….

Due to the isolation Burma has had from the rest of the world many of it’s colonial buildings have remained untouched.  As this has usually been due to lack of funds to do anything else many are in a bad state of repair.  The influx of tourist, aid and investment money into Myanmar has meant…