In many ways Mandalay is much quieter and laid-back than Rangoon but traffic congestion is increasing and things are changing.  It is not a pretty looking city, but it does have it’s own charms.  Most guides recommend if you have enough time in Burma at least one day here will be worth your while.

Mandalay airport is located 45km south of the city itself.  The drive takes about an hour.

In a flat area this 230m hill stands out.

The best times to visit are outside the heat of the day – so early morning or leading up to sunset.

It is possible to walk all the way up the hill and there are covered stairways.  There are supposed to be 1790 stairs – so it does involve a little effort.  There are 4 stair approaches and the 2 on the southern side are considered to have the most gentle incline, while the western has the steepest incline.  The southern stairs are guarded by two enormous Asian lions. 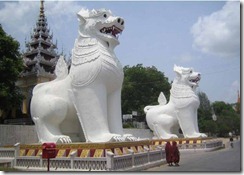 Many people will however take a motorised version up the hill and walk back down.

The hill is steep and three-wheeled public transport struggle to make it up the incline.  Instead blue taxis will take people to a pint halfway up the hill where an escalator will take you to the top.

Between the top and the bottom of the hill there are a number of temples and monasteries as well as people selling food and water.

From the top there are obviously good views over the city

A good trip report of this can be found http://www.legalnomads.com 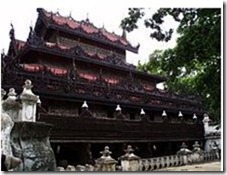 This is a wooden monastery that was once part of the royal palace.  Most of the other palace buildings were bombed in WWII, but as this was a monastery this was spared.

The interior wooden carved panels are in excellent condition but those on the outside have fared less well. 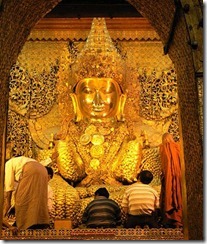 This is one of Burma’s top Buddhist sites.  It was originally built in 1784 but was destroyed by fire 1884 and then rebuilt.

The most famous icon here is the 4m high bronze Buddha.  Over the years temple worshippers have applied layers and layers of gold leaf.  The gold covering is now 15cm thick around the base of the statue.    The monks carefully wash the image each morning and brush it’s teeth. 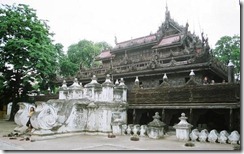 This is a peaceful place not always crowded with tourists.  Built in 1895 by wealthy Chinese merchants on poles.  Around it is you will see a large number of monks in the area.

There are a number of places that are outside the city of Mandalay and make for a pleasant part day or full day excursion.  These include Mingun, U-Bien Bridge, and Sagaing

If you are heading to Bangkok from Vientiane then it is worth considering the overnight train.  Given that a 1st class fare costs just under USD $40 and 2nd class about $25 it is very economical. The train leaves Nong Khai, across the Thai Border at 18:20 and is scheduled to arrive in Bangkok at…

This morning’s destination was the Shwedagon pagoda, the most important Buddhist site in Burma.  We knew it was a must see in Yangon, but had not anticipated how stunning it would be. The lower part of the central stupa is covered in gold leaf but higher up the panels are solid gold and the top…

http://www.jimthompsonhouse.com/visitor/index.aspJim Thompson was an American who had a profound influence on the resurgence of the modern Thai Silk industry after World War II. With the aim of producing consistent good quality silk and meeting customer tastes, the bright jewel coloured silks synonymous with Thailand, became a thriving industry.  He disappeared while on holiday with friends…

The overnight train leaves from Hualamphong station central Bangkok at 20:00 hours and is scheduled to arrive in Nong Khai at 08:25 the next morning.  From here you can choose to (1). make your own way to the Friendship bridge and Lao/Thai Border or (2) take a connecting train into Laos.   The connecting train…

There are many hotels to choose from in Luang Prabang.  Here are 5  in all price ranges and why they are worth staying at View Luang Prabang Hotels/Guesthouses in a larger map     Sopha House – quiet and close http://www.sophahouse.com/ 52 Ban Watsene Luangprabang Laos Doubles start from $15/$20 per night (Low season/ High…