Kakku is a group of nearly 2500 stupas in an area about 1 square kilometre, sometimes described as a forest or orchard of Stupas .  This area that has only been open to tourists since about 2000. 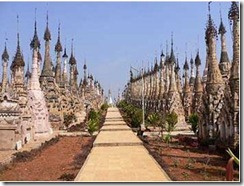 The Kakku area has been restored, so many of the Stupa have been reconstructed rather than being left in a natural deteriorating state.  The area has been fenced and footpath laid in many areas.

The site lies in the Pa-O tribe territory and site is managed by a Pa-O collective.  Admission is $3 plus $5 for the local guide

Taunggyi has a balloon festival toward the end of October/November each year depending on the full moon. Many people travel to witness the balloons and most are locals. Most balloons are made of mulberry paper and can be 6-10m in height. Balloons are floated both during the day and the night. Those at night are illuminated and some float carrying fireworks. There is a lot of pageantry and fireworks can go on for 15-30 minutes.  During this time accommodation in Taunggyi itself is hard to come by.

Something a little different is a winery in Burma.  The Aythaya Winery is 5km outside Taunggyi. http://www.myanmar-vineyard.com/  The first releases were bottle in 2004 from vines from France, Germany, Spain and Italy.They produce a white (sauvignon blanc & chenin blanc), a rosé (moscato) and a red (syrah/cabernet sauvignon). Wine tastings are offered and there is a European cafe.

To get from Vientiane, Laos to Udon Thani, Thailand there are a couple of options – the direct bus to Udon city centre and secondly a public bus to the bridge then a mini-van to Udon Thani airport.  Picture from globaltravelmate.com The Direct Bus This is a service that will take you into Udon City…

This is the overview of some of the main sights you may wish to see while in Kuala Lumpur. It is only a small selection but these are easily done in a 1-2 day visit. Each is described below with links to the map so you can work out where they are.You can download this page…

Siem Reap is Cambodia’s biggest tourist destination.  Deciding how to use your time at the temples is a complicated business.  Some good resources for this are Canby Publications Particularly useful is their suggested itineraries from 1/2 a day through to a week Canby Publications  Also their links to maps and other information is unrivalled. Lonely…

Lake Inle does not have direct airport access.  The nearest airport is Heho airport 45 minutes to an hour away.  Easy driving with nice countryside to the township of Nyanugshwe.The lake is made up of two lakes the Northern, where most tourists limit themselves to and the Southern.  Getting on the lake You will have…

Due to the isolation Burma has had from the rest of the world many of it’s colonial buildings have remained untouched.  As this has usually been due to lack of funds to do anything else many are in a bad state of repair.  The influx of tourist, aid and investment money into Myanmar has meant…

As with many Asian destinations your travel planning should be based on the fact things happen slowly here.  Travel times are longer than you expect and not everything will go to plan.  If the number of locations in the itineraries below seem sparse, there is a reason for this!  But you will have no problem…