Like Angkor Wat in Cambodia the temples around Bagan are an inspiring sight.  They date from time when Bagan was the capital of a number of ancient kingdoms.


150km south of Mandalay Nyaung U is one of the most convenient stopping off points for the area given it has an airport with regular flights from other cities in Burma, near the railway and is within about about 10km from both Old & New Bagan.


The Bagan archaeological zone covers an area of over 40km2 and an admission charge of USD 10 is levied on foreign tourists.  Many of the temples date from the 11th and 12th century.


Old Bagan was cleared in 1998 and it’s inhabitants forcibly moved to new Bagan.  Unesco has not added this area to it’s world heritage list.  Some speculate this is because of issues such as this and not wishing to support the military government.


Hotels in Old Bagan, while they may be close to the temples are mainly luxury variety and run directly by government agencies.  You may prefer to look at New Bagan or Nyaung U for other options.

How to see Bagan  – or what should my itinerary be?

One of the best ways to plan your journey around Bagan is to simply print off a map of the area, with marked temples and begin to explore.  Printing further history about the temple construction will further enhance understanding, or hire a local guide to understand better the history and significance.


You can hire a bicycle to make your own way around the temples, at your pace and going wherever you want.  Given the climate this can be hot work.  Alternatively you could hire one of the horse and carts that are abundant for the tourists.  The driver know the area and can take you to areas less busy with tourists.

http://www.myanmars.net – a clear map of the main temples and the surrounding area
http://www.orientalarchitecture.com – a clickable map with more information about some of the specific temples

Some main temples – not to miss 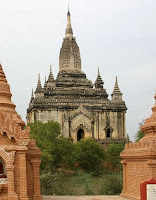 Shwegugyi Temple (built c. 1131)
This temple is built on a 3m brick foundation and supposedly built in just 7 months 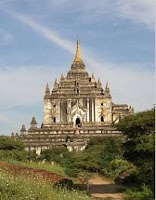 Thatbyinnyu Temple (built mid-12th century) The temple is shaped like a cross, but interestingly is not symmetrical. The 2 storied temple  is the tallest in Bagan.

The temple is a fusion of Monand Indian style of architecture. The temple is highly revered and  is also known as “veritable museum of stones”.  The temple was damaged in the 1975 earthquake but  has been fully restored.  The temple spires were gilded in 1990 during 900 year celebrations.  Situated beside Thatbyinnyu.

Dhammayangyi Temple (built mid 12th century)  is the widest temple in Bagan, and has a similar layout to the Ananda Temple.  The temple’s interior is bricked up for unknown reasons, and only the four porches and the outer corridors are accessible.

It is the second tallest temple in Bagan. With 2 storeys and three lower and four upper terraces. The temple was heavily damaged during the 1975 earthquake but has been since restored.

In Nyaung U the Shwezigon Pagoda (built early 12th c) Has a circular golden stupa surrounded by smaller temples and shrines.  The pagoda is believed to enshrine a Buddha bone and tooth

Myinkaba – village between old and new Bagan is famed for it’s lacquer ware workshops and there is plenty of it for sale.

This is the overview of some of the main sights you may wish to see while in Kuala Lumpur. It is only a small selection but these are easily done in a 1-2 day visit. Each is described below with links to the map so you can work out where they are.You can download this page…

Travelling in Burma is harder than other countries in the region.  of course you can travel independently, but restrictions and timetable changes are a part of the deal. For this reason most travellers choose to use a local travel agent.  This gives them flexibility with travel arrangements and takes much of the stress out of trying to make arrangements from abroad….

The Gardens by the Bay complex on the Singapore waterfront is an excellent destination while in Singapore.  The official details are covered well on the official website, so this is personal experience and tips to add to this information.  To keep the information easy to navigate I have split this post into three parts.  In…

Yangon is  home to over 5 million people.  Formerly it was called Rangoon and is the economic hub of the country. View Yangon (Ragoon) in a larger map Shwedagon Pagoda An iconic symbol of Burma and considered by many to be the single-most important religious site in Myanmar.  In this regions there has been many…