A visit to Vientiane is a slow down in pace.  A quiet capital, Vientiane rewards the visitor who slows down and just enjoys what is going on around them.  There are a number of places to visit, but equally important is sitting and watching the locals go about their business. 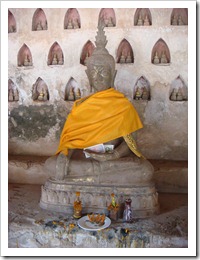 Description:
Built in the early 1800s Wat Sisaket survived much of the destruction raiding Siamese war parties wrecked on Vientiane over the years.

Uniquely the walls have alcoves that display thousands of smaller Buddha on top of the 300 or so seated Buddha. 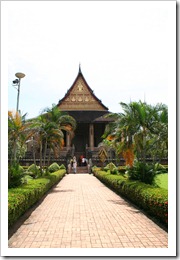 Description:
Technically this is not a wat because no monks live here.

But it was built to hold the Emerald Buddha in the late 1500’s, it was destroyed in 1828 wars and since then it has been rebuilt .  The emerald Buddha is no longer here – it was taken by the Siamese in the 1779 war and is now in Bangkok

It is a hidden gem and well worth the time to visit –the sculptures are serene, the gardens green  and  it simply has a very peaceful feeling. 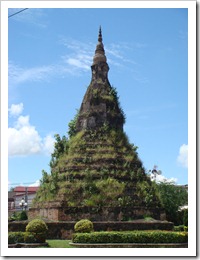 Description:
Located in the middle of a roundabout this was once covered in gold.  However it was stolen during the various wars with Siam.  Periodically the weeds are cleared of so it really is black.

It is supposed to hold the 7 headed dragon that protected Vientiane citizens in the 1828 war. 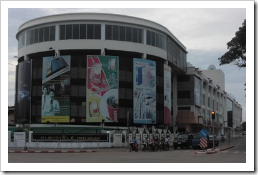 Address: Lane Xang between the presidential palace and Patuxai

Open: All day – not just mornings

It is a very good place to buy textile souvenirs, many of which are cheaper than in the stores in town.But do watch for bag snatcher around here. 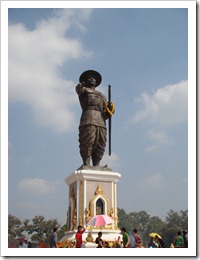 Address: alongside the Mekong

Description:
In 2010 Vientiane celebrated 450 years as capital of Laos PDR.  The statue and park were unveiled at this time.

Chou Anou was king from 1805 to 1828 and he played an important part in reuniting the country after Siamese invasions and rule.

The park is popular with Lao families and the installed exercise equipment is well used.  If you are in the area between 6 & 7pm you may see group aerobic sessions

Description:
Less of an attraction, more of a reference point.  The fountain seems to go sometimes and not other times.

A number of restaurants can be found around this area and there are always Tuk-tuks to be found here. 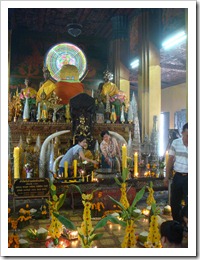 Address: Th. Setthathirat, past Wat Sisaket heading away from town

Description:
Wat Simuang has a different vibe from other Wats around Vientiane.

It is the Wat that is supposed to protect the resident of Vientiane and it is heavily frequented.  It also has a neon sign inside the sim and animals outside.

Good luck is dispersed to those followers who leave offerings 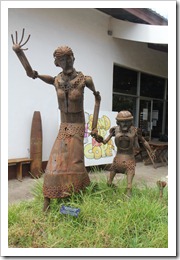 Description
During the Vietnam war Laos became the most bombed country in the world.  Today the remnants of those bombs are still killing and injuring people.

The centre focuses on rehabilitating injured people – not just from bombs but from other accidents around Laos.

The displays are simple and not flashy but they are informative and moving.  This is a must-see as part of the understanding of recent history. 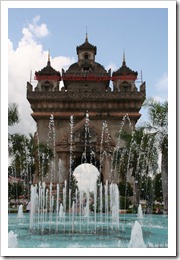 Description
This is the one place in Vientiane where you can climb and get a view over the flat city.  The park is very popular with locals and everyone wants their photo taken here.

This is from the actual plaque on the monument
"At the northeastern end of the LaneXang Ave. arises a huge structure resembling the Arc de Triomphe. It is the Patuxay or Victory Gate of Vientiane, built in 1962 (B.E. 2505), but never complete due to the country's turbulent history. From a closer distance it appears even less impressive, like a monster of concrete. Nowadays this place is used as leisure ground for the people of Vientiane and the seventh floor on top of the building and serves as excellent view point over the city." 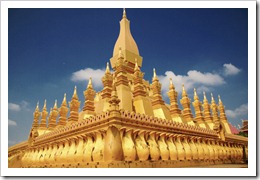 Description
This is a national monument commemorating Lao sovereignty and Buddhist beliefs.  The golden Stupa is a symbol of Laos PDR.  Originally constructed in the mid-1500s it has had a number of reincarnations since then.

Most accommodation in the Bagan area is in the Nyaung U or New Bagan townships.  New Bagan has the best appointed mid range options while Nyaung OO has the cheaper backpacker options for food and accommodation.  Old Bagan residents were cleared by the government in the late 1990s to New Bagan.  In old Bagan itself…

Downtown Vientiane has a wide range of dining options from budget to expensive, from local Lao to French.   Having a steady expat population means that restaurants need to have a good quality to keep them coming back and this is a very good thing. View Vientiane Dining in a larger map Lao Food Best of…

Nyanugshwe is the town with the most accommodation on Lake Inle and other tourism infrastructure.  Only 35km from Heho airport the journey takes between 45 minutes and an hour.  Accommodation Teakwood email teakwoodhtl@myanmar.com.mm Teakwood is highly recommended by many travellers due to it’s high standard of maintenance and nice ambience.  However a number of travellers…

From LCCT you have the following options for public transport   Taxi There is a prepaid coupon option as you exit from customs/baggage.  A series of booths where you name your destination and the schedule rate is given to you.  For an indication of what these fares will cost check out this calculator  http://www.mesraindahjaya.com/  …